Mr. Zeller began training at Summit in October 2017 after watching how much his two children had enjoyed their training.  Mr. Zeller loves the challenge that every class brings.  He is a firm believer in the 5 tenets of TKD and the lasting impact they have on students and instructors alike.  The physical and mental strength gained through training at SMA is something that he embraces each and every day and is always looking forward to the next chapter of his journey.  Mr. Zeller is extremely honored and equally excited to be part of the JIT team and is looks forward to helping other students learn and have fun through their own journeys. 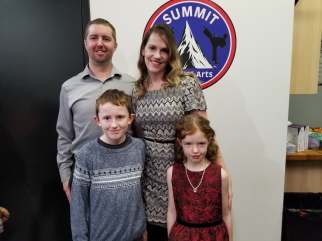 We asked Mr. Zeller some questions, here’s what he had to say……..

What is your teaching philosophy?  I try to make sure everyone is engaged / having fun, but at the same time pushed to achieve their potential.

Why you love martial arts?  To me it’s a combination of honing & perfecting body, mind and spirit.  Being able to apply what has been learned to achieve your goals.

Why you love SMA?  SMA embodies a passion for martial arts.  Your achievements are earned through hard work and dedication which makes your journey that much more fulfilling.

What is your most memorable / proud moment in martial arts ?

As an Orange belt there was one Kicking class where we were practicing our Jump Front Snap Kicks, and one of the instructors came by, took the clapper pad from my partner and held it higher than I’ve ever kicked before.  In fact, I thought it was ridiculously high / and near impossible.  He told me he believed in me, to get into a good stance and really push myself.  I ended up kicking the pad much to my surprise, and after a solid high five from the instructor I realized just how far I can go if I put my mind to it.

Mr. Zeller graduated the Junior Instructor Training program in July 2019.  He is an key member in our team.  His dedication and passion for the martial arts can be seen in every class.  Thanks for being part of OUR journey!!