Mr. Stronge started training in the martial arts in 2004 after being inspired by the Teenage Mutant Ninja Turtles.  Mr. Stronge has been with SMA since 2014, shortly after our opening day.  He has been training in the martial arts for 14 years in various styles and has competed in countless tournaments. In July 2016, he was chosen as CTV Athlete of the Week for his Outstanding Performance and Athletic Ability. Later that July, Mr. Stronge competed at the 2016 WOMAA World Martial Arts Games in Essenbach, Germany, bringing home two silver medals in the point and continuous fighting divisions. 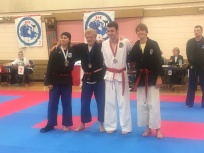 After almost a decade in the tournament scene, Mr. Stronge has now found a new passion – teaching. His greatest accomplishment has been passing on his love of the martial arts to others.  He is dedicated to learning and improving his skills both as an instructor and a student. Mr. Stronge hopes that everyone he has the pleasure of instructing can find the same joy in the martial arts that he does.

Mr. Stronge earned his first degree Black Belt on Saturday, June 2, 2018.  In his essay what it means to be a black belt, he wrote:

“I’ve come close to the black belt twice before. When I was ten or eleven, I became a junior black belt at the first school I ever trained at. When I was thirteen, I was a black stripe at a different school, and my black belt test was within reach for the second time. Looking back on where I was, and what I was, I wouldn’t have measured up to our green belt standard. That’s why this black belt, and this organization, is so meaningful to me. When you test for a belt, you know that you have earned it. The level of prestige associated with the black belt is unlike anything I’ve ever seen before in my martial arts experience, and I’m glad that this is where I’ve chosen to spend my time.”

“To me, the black belt is the difference between training in the martial arts and being a martial artist. When a student is a red belt or black stripe, it should be expected that the fundamental, physical aspects of the discipline are mastered. The black belt test, the one I’m about to undergo, is the last true test of physical aptitude. After that, once the black belt is attained, the journey becomes more of a mental one. It is the end of one part of the journey, but the beginning of another. A black belt embodies the tenets of taekwondo, their own personal code, not only on the mats and in training, but in every aspect of life. They are courteous – kind and respectful to everyone they encounter. They have integrity – they operate with truth, and honor, and hold themselves to a high personal standard. They persevere through any challenge or obstacle. They possess a sense of discipline, of self-control, of both their actions and their emotions. And they refuse to let their unbreakable, indomitable spirit be defeated. In my view, the difference between a red belt and a black belt has nothing to do with kicking and punching. The difference is in those tenets. We learn them on the mats, but we adopt them in endeavors unrelated to martial arts too. We develop the ability to regulate our emotions, our feelings of anger, of recklessness, of doubt, of fear. We interact with our peers with a sense of respect, and of fairness. We refuse to give in easily when faced with adversity. That is what makes a black belt a true ambassador of the martial arts.”

“Over the last year, I’ve caught another martial arts bug, and learned more about a whole other side of all this. I had the opportunity to start teaching kids. I never thought that I would be much of a teacher: the idea of standing in front of a class of students and talking to them terrified me. But as I’ve watched them grow and improve over time, I’ve realized that I’ve wanted to do this my whole life. It’s not a cliche to say that teaching is the most fulfilling job you can have – the sense of pride I have in my students when they break through barriers and improve is unparalleled by any other feeling I’ve felt. I’m going to keep chasing that feeling as long as I can find students that want to learn from the experience I have.Teaching martial arts is what I was meant to do, and I hope I can give back to the organization that has given me so much by continuing to be a part of training the next generation, and I hope I can do that for a very long time.”

Mr. Stronge is an integral part of of the SMA Team.  He brings a level of excitement, energy and passion for the martial arts to every class!  Our students come out of class with big smiles and enthusiasm for learning – what more could we ask for!  Thanks for being an awesome part of the Team Mr. Stronge.